The form man of the last thirteen years in the Supercars Championship, Jamie Whincup has amazingly finished out of the top five in that period. In 2017 Jamie won a record breaking 7th championship in the Supercars Championship and continues to race fast and stay on top. He is currently driving for the very successful Red Bull Holden Racing team. Jamie is a natural on the track and a fan of anything with an ignition.

With history-making back-to-back V8 Supercars championships at Ford and now Holden, it’s easy to understand why Jamie Whincup has a target painted squarely on his rear spoiler.

At just 37 years of age and with seven championships and four Bathurst 1000 titles to his name, this Queenslander has been identified by experts as the man likely to break every standing record in V8 Supercars history.

It all started in 1991 when his father purchased a seven-year-old Whincup his first ever go-kart. By age 14 he had claimed countless rookie and junior titles and celebrated his 15th birthday by winning the Senior Formula A karting title. And in the very same year he finished high school Whincup added to his mantle piece the Australian Formula Ford Championship trophy. With a fierce attitude and relentless in his desire to win, it was only a matter of time before Whincup made the leap to V8 Supercars.  Spotted by Garry Rogers, he made his V8 Supercar debut at the Queensland 500 in 2002 before graduating to a full-time position with the team a year later.

But 2003 proved to be difficult and Whincup found himself dumped come the end of the season and only able to scrape together an endurance seat in the third Castrol Perkins car in 2004.

Given a lifeline by Tasman Motorsport in 2005, Whincup responded in style, partnering the late Jason Richards to podium results at Sandown and Bathurst.  It was there that Triple Eight Race Engineering owner Roland Dane, a relative newcomer to Australian motorsport, spotted Whincup’s talents.

In 2006 the Printers Assistant was signed as three-time champion Craig Lowndes’ understudy but burst out of the blocks to win the first race of the season and then his first Bathurst 1000.

He returned in 2007 to challenge for the title, winning four rounds on his way to becoming runner-up to Garth Tander by a mere two points.

In 2008 he would finish the job, sealing the crown in style with a victory in Race 1 at Oran Park in a season where he won six rounds and was clearly the class of the field.

He backed it up again in 2009 with a new FG Falcon, winning 11 races and sealing back-to-back titles and his 2011 title win made him just the second man after Norm Beechey – but first in the modern V8 Supercar era – to have won the championship in both a Ford and a Holden.

After falling short in 2010, the Triple Eight ace struck back with force in 2011 to win 10 races and take nine pole positions on his way to his third V8 Supercars Championship crown.

He then backed that up in both 2012 and 2013 with 12 and 11 race wins respecitvely to seal his fourth and fifth titles which put himself among the all-time greats in the record books.

After a fairly slow start to the year, 2014 saw Whincup take the 'All Time Pole Position' award and his record breaking 6th Championship win, making it 4 straight.

While 2017 saw the lowest number of race wins since 2006, Jamie's consistency kept him at the top of the tables which ultimately led him taking the championship by just 21 points.  This was a championship that literally came down to the last lap of the last race.

Whincup maintains his steely focus that has cemented himself as a modern-day great of Australian motorsport. 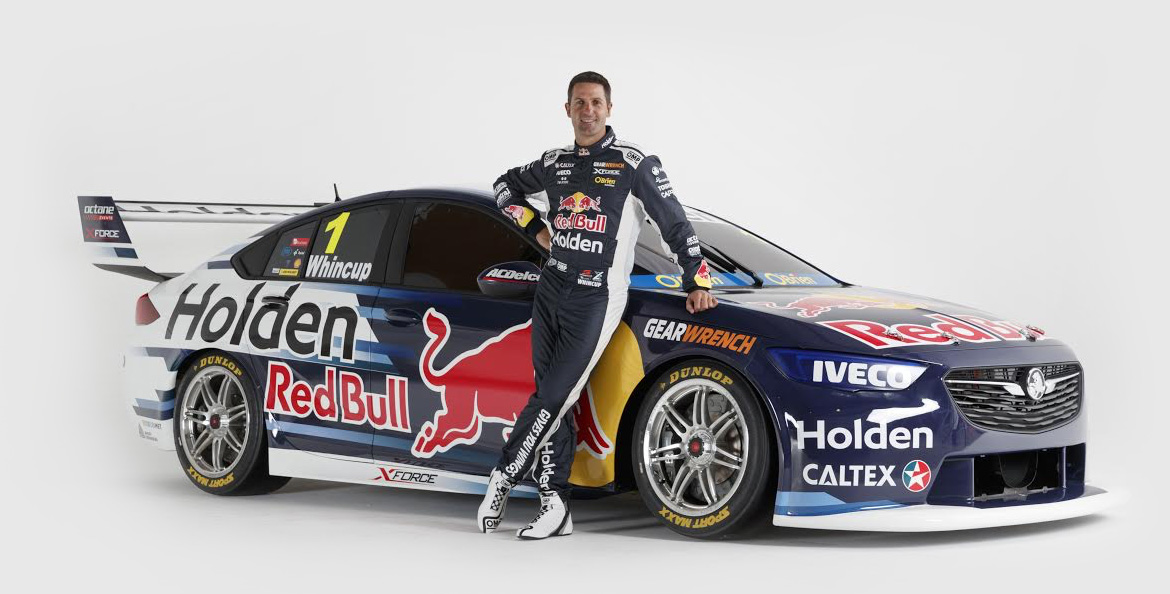 FORGET MUFASA AND PUMBAA, THE RED BULL RACING AUSTRALIA ZB COMMODORES ARE ALL LION KING. IDENTICAL LION TWINS IF YOU WILL.

POWERED BY BESPOKE KRE BUILT GM 5.0 LITRE RACE V8 MOTOR AND PRODUCING 635 BRAKE HORSEPOWER, THEY'RE ANYTHING BUT CIRCUS LIONS. IN FACT, EXPECT THE TRIPLE EIGHT-ENGINEERED COMMODORES TO BE QUICKER THAN EVER.